"The Karabakh Question in Historical Perspective" provided by Dr. Candan Badem - Invited Lecture in the Doctoral School in the Social Sciences 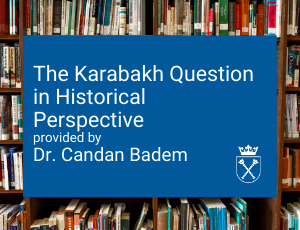 This one-hour seminar will discuss the historical roots of the recent conflict in Karabakh between Azerbaijan and Armenians. I will briefly introduce the history and demographic characteristics of the area from 19th century onwards. Tsarist Russian colonization policies and Soviet nationalities policies will be discussed. I will also elaborate on Soviet-Turkish relations, the Ottoman-Armenian question, pan-Turkism and on how they influenced geopolitics in the south Caucasus region. Why did the Soviets include Karabakh within Azerbaijan? Was there a better alternative? Finally, the seminar will touch upon post-Soviet developments, nation-building and mutually exclusive nationalist discourses and historiographies.

You can join the meeting here.

Dr. Candan Badem is an associate professor of history. He received his BA degree from Boğaziçi University in 1992, MA from the University of Birmingham Centre for Russian and East European Studies in 2001 and his PhD in History from Sabancı University in 2007. His publications include The Ottoman Crimean War, The Construction of the Tiflis – Aleksandropol – Kars Railway (with Sonya Mirzoyan), a monograph in Turkish on the Kars and Batum oblasts (provinces) under tsarist rule and articles on many subjects including the Armenian Question. He is one of the very few scholars from Turkey who have ever done research at the National Archive of Armenia. He has also conducted research in the state archives of Russia and Georgia. His main area of study is the Ottoman-Russian wars in the 19th and 20th centuries and Ottoman-Russian borderlands with a focus on the South Caucasus.