Call for papers: Interrogating heritage and tourism processes through a gender perspective 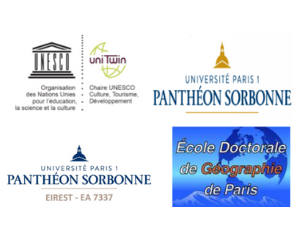 The PhD students of the EIREST laboratory (Interdisciplinary Research Team on Tourism) of the University of Paris 1 Panthéon-Sorbonne are organizing the International Meetings of Young Researchers in Tourism on the theme "Questioning heritage and tourism through gender". They will take place on 6, 7 and 8 September 2021 in the form of a webinar.

Abstracts of proposals should be sent to rijct2021@gmail.com before 25 June 2021.

The International Meeting of Young Researchers in Tourism (RIJCT) “Interrogating heritage and tourism processes through a gender perspective” will take place on 6, 7 and 8 September 2021. Their aim is to propose new reflections in the consideration of gender in tourism and heritage studies. The RIJCT proposes an overview of the latest studies which analyse gender through domination relationships and identities structure. The different lines of studies analyse gender through the methodological issues, intersectionality in touristic and heritage projects, and attractiveness policies.

Due to the current situation, the RIJCTs will be organised in the form of a webinar on the 6, 7 and 8 september 2021. The proposals for papers will take the form of presentations followed by a discussion. To propose a communication, please send an abstract and 3 to 5 keywords (500 words, Times New Roman, 11, 1.5 line spacing), specify the language of communication chosen (French or English) and a brief presentation (specifying the affiliation institution/organisation, research fields, thesis subject and contact email).

Proposals should be sent to rijct2021@gmail.com before 25 June 2021 and the selection results will be communicated at the end of June 2021. Full texts should be sent before 1 July 2021 (1000 words with an indicative bibliography).

The notion of gender is recent. It emerged after the Second World War and asserts itself with Gender Studies in the United States in the 1970s. Gender Studies is a multidisciplinary field of academic research. They presuppose the existence of a social construction referring to a "social reality that is a source of inequalities between individuals and groups of individuals, according to their sex and sexual preferences" (Vallet, 2018). Due to the recent genesis of the gender concept, attempts to cross-reference gender studies with tourism and heritage studies are still limited. Several works have shown that tourism is a highly gendered activity (Kinnaird and Hall, 1996) by analysing, for example, the importance of gender in tourist landscapes, the factors of attraction and repulsion, the perceptions of the same tourist destination according to gender (McGehee, Loker-Murphy and Uysal, 1996) or gender relations within tourism projects (Louargant, 2003; Cauvin-Verner, 2009) and sexualities relating to tourism (Staszak, 2012). On the tourism industry side, several studies have highlighted both inequalities in access to tourism jobs and the associated cultural, social, economic and political changes that maintain or challenge gender roles and hierarchies (Aitchison, 2005).

Work on the social and cultural impacts of tourism activities, particularly through the issue of the commodification of local cultures (Kinnaird and Hall, 1996) supported by public policies for tourism development and heritage preservation, has shown that men and women play different roles in this process (Swain, 1995). As a tool for the critical analysis of power relations, gender is an essential element of understanding in order to analyse the unthinking of gender in heritage development and exclusion processes (Belvilacqua, 2015) as well as the heritage claims of sexual minorities (Chantraine, 2017). Few works cross gender, tourism and heritage at the same time. However, the analysis of this triangulation makes it possible to grasp the articulation of tourism and heritage with territories and local communities. It questions identities, representations, collective memory, roles and inequalities that shape tourism and heritage processes.

The International Meeting of Young Researchers in Tourism "Questioning heritage and tourism processes through gender" wish to encourage reflection on the links between tourism/gender, heritage/gender and tourism/heritage/gender. Within this framework, 4 lines of study have been elaborated:

● Intersectionality in the fields of tourism and heritage

● Attractiveness policies from a gender perspective

More information can be found in the document below.